This article is part of a series of posts about migrating from GatsbyJS/React to Sapper/Svelte. You can check the other posts: part 1, part 2, part 3, and more to come!

Hey there! This is a little interlude. I totally forgot in part 2 to tell you about how I automated Cypress.io End-to-End tests within my Github Actions workflow, as part of my blog’s Continuous Integration pipeline!

Using #GithubActions with https://t.co/LDJt14VHBD, I managed to run my @Cypress_io #E2E tests from within my #GitHub #Workflow!
Awesome!
And still very fast 1:31 for 36 tests. pic.twitter.com/PJvPrtg3Hb

So I will try to give more details below.

I already in the past tried to do this kind of automation with Selenium, Appium, Protractor (you know how I love those, right… NOT) and tried too much time to make them work, somehow succeeding but it was very fragile and would break for some reasons every few days.

So we abandoned it.

Yeah, writing E2E tests were not only complicated and time costly, but also the Continuous Integration did not work.

Now, of course, Cypress.io fixed all of this.

They’re the best – Except they don’t pay me to say this 🤪 … well, they totally sent me swag since then, so they are the bestest!

If you want more basic details about the GitHub Actions Workflow, take a look at this previous post explaining the core workflow when I first created this blog.

Of course, since then, the workflow has evolved, and now it looks like this: 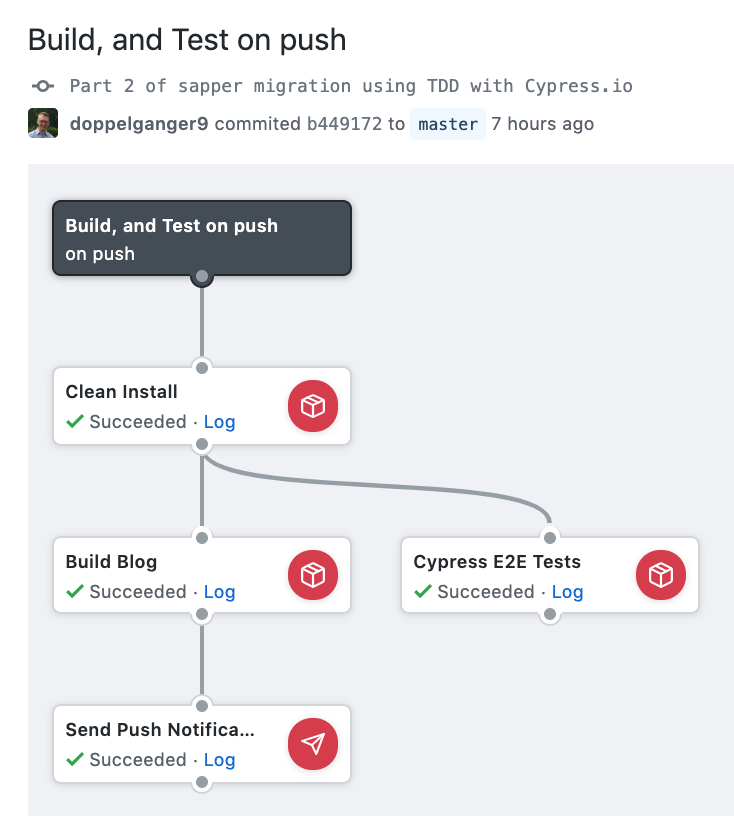 Here are the main.workflow file contents:

As you can see, I removed some steps as I migrated from GitHub Pages to Netlify to publish & host my blog.

I already talked briefly about it, but let’s recap:

Compared to GitHub Pages, I prefer Netlify because:

So I merely added this action: 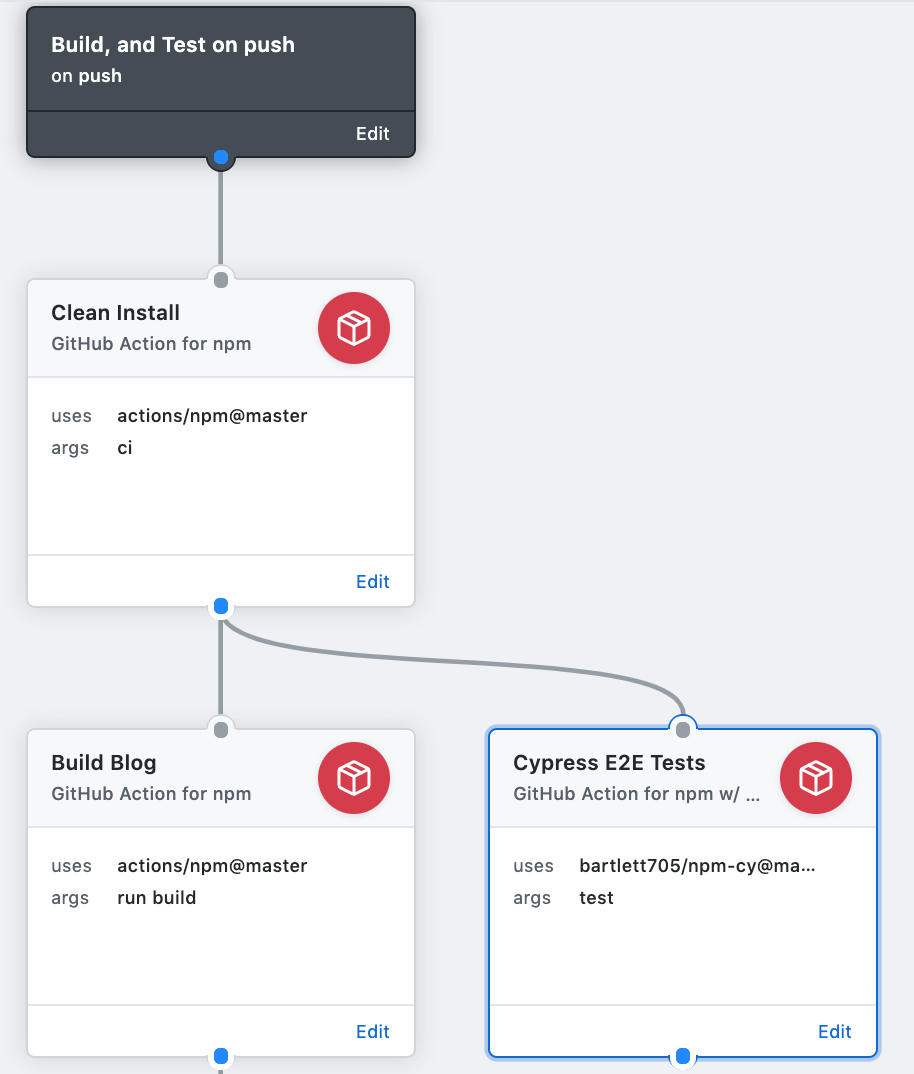 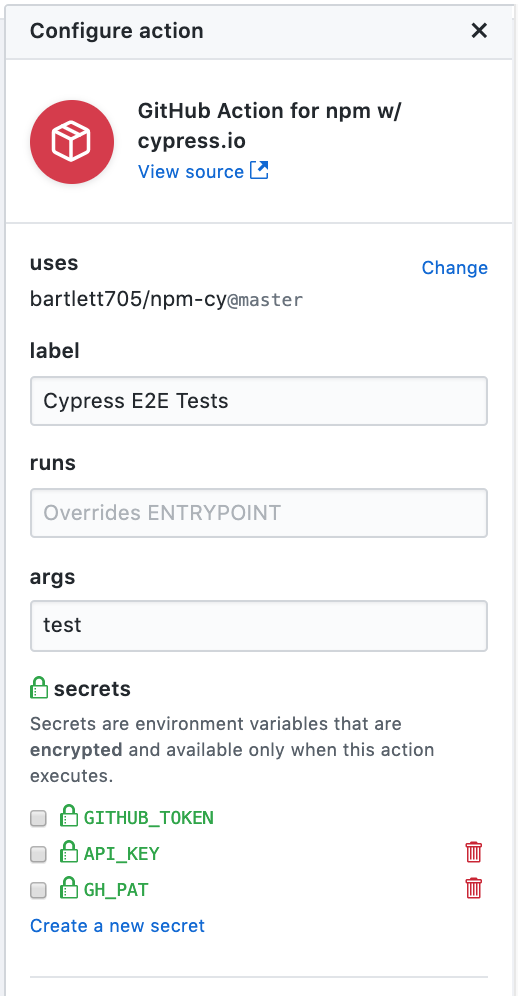 Frankly, I’m a command line guy, this time I just edited the main.workflow file to add text to it. Okay, it did not work out so well, as I had to git commit --amend and push --force to make it work because I had forgotten to had the step name in the resolves array.

which references the Action bartlett705/npm-cy, for which you can check the GitHub Repository, with a README full of instructions if you want to know more about how to use this Action.

Of course, my package.json has an npm script named test, that runs in parallel npm run dev (the dev server) and npm run cy:run the Cypress.io integration tests:

By the way, this script is provided by the Sapper template, I just reused it!

I think you deserve an explanation because I might have said it too quickly.

The real gist of the tests as reported in the cypress logs took 42 seconds in this latest sample: 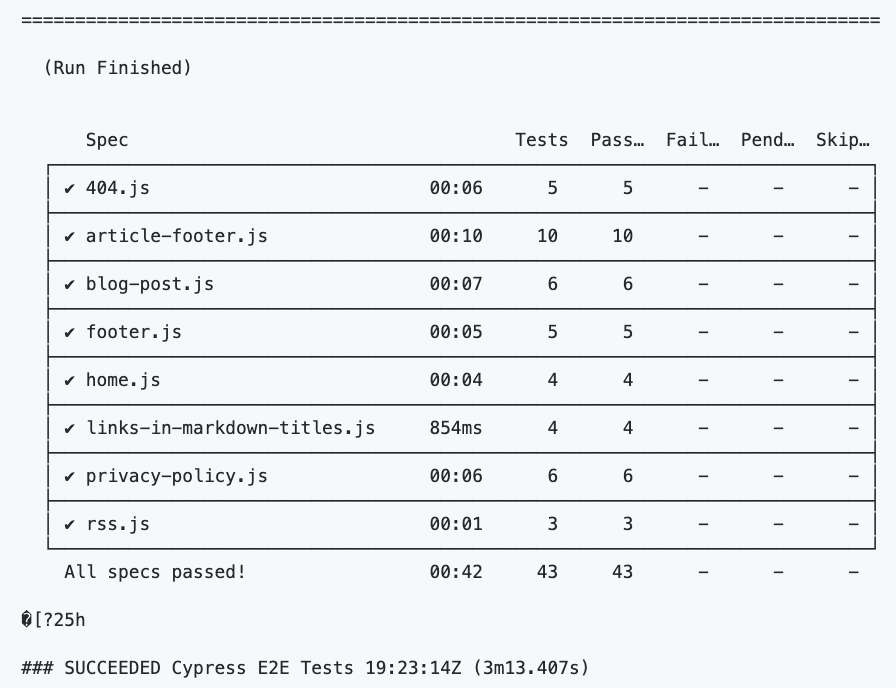 And we also see that the step took all in all 3 minutes and 13 seconds to complete.

This is confirmed in the GitHub Action UI: 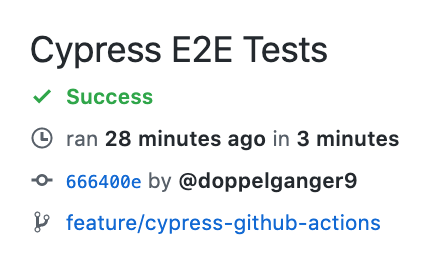 Here is some details on the time spent:

Now you know what happened between the 42 seconds and 3 minutes: Docker image pulling by GitHub actions, verifying and launching Cypress.

Today we saw just one little step to make Cypress.io run on a GitHub Actions Workflow. It just works out of the box.

I also explained why I chose Netlify over GitHub Pages to deploy this blog.

I hope it will help you set up this in your own Workflow! If I can be of any help, or If you have any questions about Cypress, Svelte, Sapper, GitHub Actions, or just want to say hi or thank you, my DMs are open on Twitter!